Warning: "continue" targeting switch is equivalent to "break". Did you mean to use "continue 2"? in /nfs/c03/h04/mnt/168176/domains/greenscreenmadeeasy.com/html/wp-content/plugins/jetpack/_inc/lib/class.media-summary.php on line 77

Warning: "continue" targeting switch is equivalent to "break". Did you mean to use "continue 2"? in /nfs/c03/h04/mnt/168176/domains/greenscreenmadeeasy.com/html/wp-content/plugins/jetpack/_inc/lib/class.media-summary.php on line 87
 Red Giant Primatte Keyer | Green Screen Made Easy

This is a download for 3 free keying and alpha matte plugins from the full EFX Keying/Alpha Plugin Suite.

EFX Keying-Alpha plug-ins were created by kaczorefx and are for use in Adobe After Effects.

Speaking of keyers, I have three favorites that you may be interested in checking out. There are tons of keyers on the market but not all of them give me everything that I want (and Jeremy and I did write the book on keying – See the image on the right!) 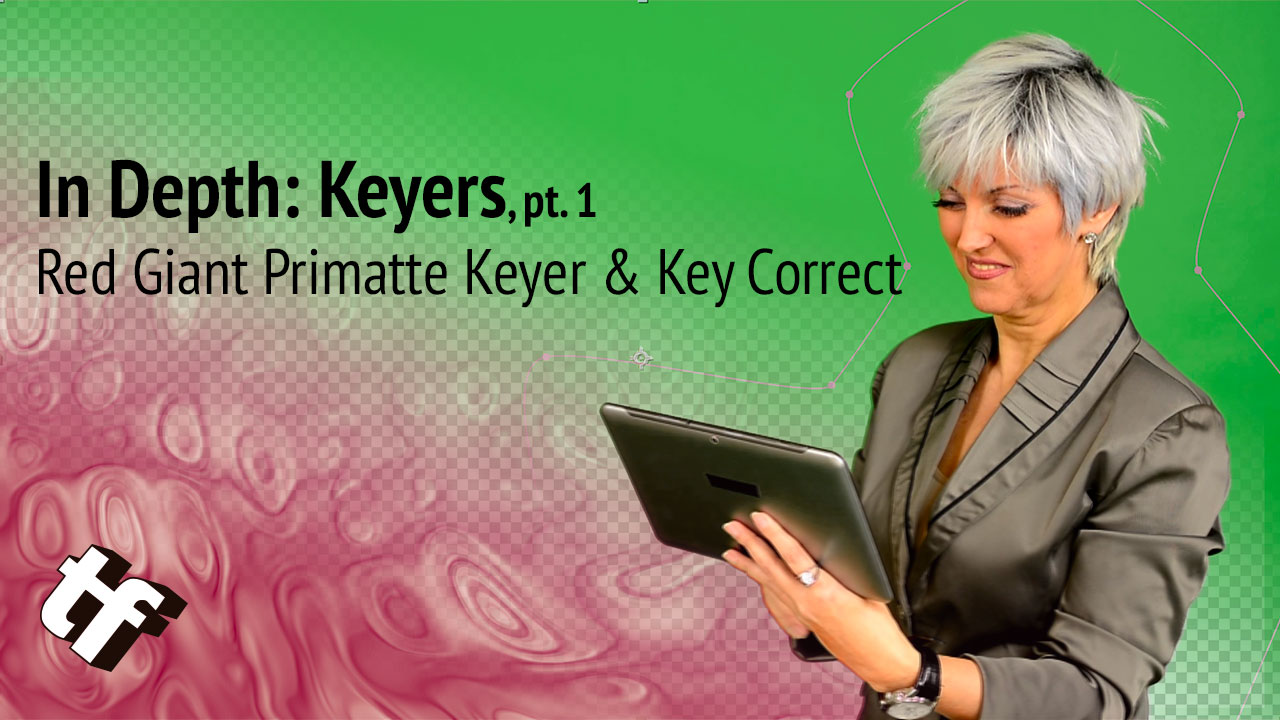 In this series, I’m going to give some in-depth information on three of my favorite keying tools that work with After Effects, Premiere Pro, and other tools. The first in the series covers Red Giant’s Keying Suite, which includes Primatte Keyer, Key Correct Pro, and Warp.

A full-featured keyer that is the result of our experience in creating hundreds of successful blue and green screen composites.

Using proprietary matte extraction techniques, zMatte quickly and simply creates mattes with minimal parameters even if you are dealing with fine hair detail, smoke, or reflections. It is easy to use, yet provides the needed tools when faced with good, bad, or ugly shots — tools such as multiple matte creations, automatic spill suppression, sophisticated matte and edge manipulation, and color correction.

By Michele Yamazaki Terpstra, Toolfarm.com
(Reprinted with Permission from Toolfarm)

As you may know, I have a book coming out in October 2016 called Green Screen Made Easy, 2nd Edition. In the book, I go over the keyers, but because it’s in print, I’m limited to how much space I have. In this series, I’m going IN DEPTH on three of my favorite keying and compositing tools for After Effects and other hosts. I’ve talked a lot about keying tools in the book, on the Toolfarm website, and at user group events. The first article will look at Red Giant Keying Suite, which includes Primatte Keyer and it’s wonderful companion tool, Key Correct.

In this series, I’m going to give some in-depth information on three of my favorite keying tools that work with After Effects, Premiere Pro, and other tools. The first in the series covers Red Giant’s Keying Suite, which includes Primatte Keyer, Key Correct Pro, and Warp.

I have a formula for these In Depth articles. Normally, I start with an overview of the tool or topic, then move on to some information on plug-ins, then lastly, I put in a few tutorials. Well, I thought I’d change things up a bit.

I was just going to come up with a quick tutorial on the basics of using Primatte and Key Correct, but this has already been done. I thought I’d give you something with a little more substance that will hopefully help you generate better keys. This little tutorial was unscripted but goes over a lot of the finer points of using edge mattes, core mattes, garbage mattes and so on. I’m putting this at the top of the article so you won’t miss it!

So, to get back to our regularly scheduled programming here’s a bit of information on Primatte Keyer and Key Correct. These tools have been used in a few major Hollywood blockbusters you may have heard of, such as Harry Potter, Lord of the Rings, Spider-Man, The Matrix, and King Kong. Both products Primatte Keyer and Key Correct are included in Red Giant Keying Suite, along with Red Giant Warp which includes six powerful plug-ins to help in compositing with control of shadows, reflections, glows and corner point warps. Warp runs in After Effects, Premiere Pro, and Apple Motion.

Seth Worley’s recent film short Go Bag used Red Giant’s Keying Suite and he talks about it at 4:40 in the Making of Video, below. If you want to see the whole film, click here.

I asked Aharon Rabinowitz about Red Giant Primatte Keyer and Key Correct about why these tools are worthy. Aharon explains, “Primatte Keyer offers the most user-friendly experience in the industry. The tools make it easy to select your background and foreground for a great key. Just drag the mouse pointer over anything that is background or foreground, and the settings adjust.” I’ll admit that this is the part that confused me when I first tried Primatte Keyer, but after I figured out how to use the tool, it’s really easy and fast.

The latest version of Primatte is 5.0 has three automatic tools that help pull a key.

Auto Compute is now an easy-to-access button with an improved algorithm and spot-on default settings. Aharon says, “Primatte Keyer’s Auto Compute Algorithms can often pull a perfect key automatically. You can literally do all or most of the work with the touch of a single button.”

“Adjust Light is a new feature that evens out the background so it’s easier to pull a key.” Aharon explains, “Primatte Keyer can analyze your background and even out the lighting before performing the key, making for a much cleaner background removal.”

Smart Sample is the last new automatic tool and it optimizes the results by smart foreground sampling and a histogram pass.

Besides having a state-of-the-art keying system, Primatte also contains compositing tools, including Spill Killer, Color Matcher, and Lightwrap. I talk about these in the video above, however, these tools are also included in Key Correct, and because of my workflow, I used the Key Correct versions.

Here is the Effect Controls panel for Primatte Keyer in After Effects.

Key Correct includes 15 plug-ins that are not for keying but they help improve your key and fine-tuning Alpha channels, plus it includes several tools for compositing. Key Correct can be used to improve keying results from any keyer, not just Primatte Keyer. Use it with Keylight, Ultimatte, zMatte, and any other tool you may have. Aharon says, “These tools can be used at all stages of the keying/compositing operation. Some of the tools are dedicated to using before you key so that you can start with the best possible footage. Other tools are dedicated to immediately follow the key, and help remove additional color spill or to clean up the matte/alpha channel. Finally, still, others are devoted to giving you the best possible composite with other layers.”

Key Correct includes the following plug-ins for working with alpha channels and compositing:

Here’s the Key Correct Effect Controls for a few of the filters that I used in the edge matte tutorial above.

More in this Series

I’ve done many articles in this In Depth Series on keying tools and several have featured Primatte Keyer and Key Correct. Here are a few.

From the article: Spill is the colored light reflected from your background and onto your actor. Spill can show up on light colored clothing or hair, on shiny or reflective elements, around the edge of footage, and it can be a big problem! It can be very easy to fix, or difficult on finely detailed, extremely reflective or semi-transparent areas.

Primatte Keyer and Key Correct use the same Spill Killer technology. Both products are available together in the Red Giant Keying Suite. Spill Killer is very simple at the core. There are not a lot of bells and whistles, but it worked well on the footage. I used slightly different settings for Tolerance so that you can see the difference.

For Primatte Keyer, Enable Spill Killer needs to be checked and the Color Mode set to Green. I set the Range to 58% and set Tolerance and Strength to 100%.

To remove the spill with Key Correct Spill Killer, you just need to apply the effect to your layer. I turned down Tolerance to 51%, and the Range to 58%, which helped to avoid giving the model a red face.

If your green screen footage didn’t turn out as perfectly as you had hoped, here are some things that you can do to fix problems and not create new ones.

Keying is part technical skill, part patience, and part sorcery. This series will take you through different areas of keying, not so much to teach you step by step, but to talk about some of the problems you’ll run into and how to fix them.

If you’d like more on keying tools and compositing, I have a book coming out this fall, Green Screen Made Easy, 2nd Edition, which I co-authored with Jeremy Hanke of Microfilmmaker Magazine. It covers everything from creating your own green screen, setting up lights, keying your actors, fixing problems, and compositing methods and tricks.

Learn the Method, Not Just The Software! Angie Mistretta demystifies the complex and powerful Primatte Keyer Pro plug-in from Red Giant Software, which can pull the matte, adjust spill suppression, handle color correction and handle the entire process of keying and matte creation. This training has been out for several years but it is still top-notch.